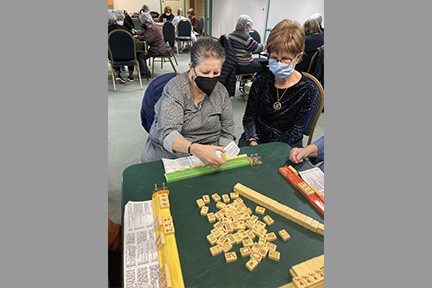 Anita Post moved her red, yellow, blue and black Rummikub tiles. Beverly Gorny studied the tiles in the middle of the table, planning her next move.

Other tables were filled with women playing the ancient Chinese game of Mah-Jongg, a mainstay at the JCC. Players in this betting game match tiles reminiscent of dominos into patterns similar to rummy.

Earlier, many of the women had chatted non-stop as they enjoyed lunch in the JCC’s Mary Sachs Auditorium.

Now, a short time later, they were nearly silent as they clicked tiles in the Mah-Jongg and Rummikub games in the senior gaming sessions that follow the twice-weekly luncheon programs.

One Mah-Jongg table was reserved for beginners who were learning the intricacies of this game in which players speak their own game language and practically make their tiles do a choreographed dance. Other tables included women who have mastered Mah Jongg’s complexities, a game that has been popular with Jewish women for generations.

Welcome to a gaming afternoon at the Jewish Community Center.

“After our Tuesday and Thursday luncheons and programs in the Mary Sachs Auditorium, we move to the Henry Miller Room for the games,” said Cheryl Yablon, senior adult club director. “We have a mix of women – some married, some widowed, and some divorced. The socialization is fabulous. We have a lot of friendships formed here."

Gaming afternoons have been going on for several months, Yablon says, a welcome activity after people were “cooped up for so long because of Covid.”

Post looked quite at home at the Rummikub table, eying the 106 blue, red, black, and yellow tiles as if they were old friends. “Some people worry about keeping score,” she said, arranging her tiles on a special rack that doesn’t show their faces to the other players. “But here, we just play for fun.”

Beverly Gorny agreed, adding “I’m hooked on this game,” as she calculated if she had twenty-five points to “come out” in the game.

Rummikub players put down tiles from their racks in sets of at least three, drawing one from the middle of the table if they cannot play. They eagerly waited for the joker tiles, which may substitute for any tile and take on the point value of the tile they represent. A Rummikub game has two jokers.

Meanwhile, Mah-Jongg players at the other tables sat intently over their tiles, their 2022 National Mah Jongg League cards at their sides. These cards list winning combinations of tiles for the year and standard regulations.

The Mah Jongg players at the JCC could be following in their mothers or grandmothers footsteps, playing a game Jewish women have loved playing for nearly a century.

Mah Jongg, invented in Shanghai, became so popular with American Jewish women that they founded the National Mah Jongg League in 1937. While Jewish men played pinochle, Jewish women made playing Mah Jongg a weekly ritual, almost as much as lighting Shabbat candles on Friday nights.

In the 1940s, it was a bonding experience for women whose husbands were overseas in World War II - a fun and inexpensive entertainment. Women taught their daughters, then their granddaughters, to play. The game has been popular ever since.

Rita Minnerly said she has been around Mah Jongg all her life.

“My mother, Leonore Mazer, played Mah Jongg for fifty years,” she said. “She played every Tuesday from 7 to 10pm and nobody interrupted. I would set up the tables and she would put out dishes of candy and nuts. These women used to play for $1 the whole night. If they ran out of money, they played for free.”

Now, Minnerly loves the game, playing every Thursday afternoon. She said the game is popular with such movie stars as Sarah Jessica Parker and Brooke Shields.

“I love Mah Jongg so much that I’ve walked through a snow storm to play it,” she said. “I play in tournaments, too. Here at the JCC, Mah Jongg brings people together.”

At another table, Yvonne O’Brien was teaching Beginner’s Mah Jongg, admitting that it’s “a difficult game to learn.” Sandy Rabin, one of the rookie Mah Jongg players, agreed.

“I started learning this a month ago,” she said, admitting that she has a long way to go. She said she’s still mastering such Mah Jongg words as Bams, Craks, Dots, Winds, Honors, Dragons, and more.

At another table, a group of die-hard Mah Jongg players were deep into their game. This group plays for $8 pots.

“I’ve been playing Mah Jongg for over fifty years,” said Joyce Green. “I started playing once a week and now play three times a week. I also go to Mah Jongg tournaments in Lancaster and New Jersey.”

She turned her attention back to the table where the clacking noise of the tiles blended in with those at the other tables, both renewing and creating powerful memories of sisterhood at the JCC.