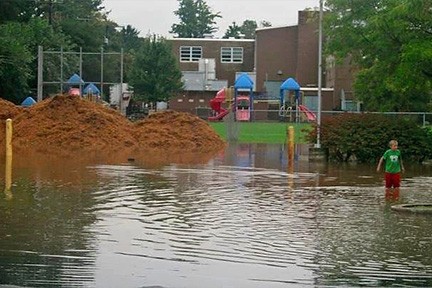 When the Harrisburg Jewish Community Center was dedicated on Front Street in 1958, community members raved about the beautiful view of the Susquehanna River.

When the river poured into the center and caused major damage during Tropical Storm Agnes in 1972 and Tropical Storm Lee in 2011, the water source didn’t seem quite so serene.

Yet the center made a comeback both times, thanks to the resiliency and hard work that characterizes Harrisburg’s Jewish community.

Ten years ago this month, Tropical Storm Lee came rumbling, filling the swimming pool with mud and water, heavily damaging the mechanical and electrical systems and soaking floors, walls, furniture, equipment, and countless other things that make the Center a second home for so many. Lee brought damage the JCC had not experienced since Tropical Storm Agnes in 1972.

In preparation for Lee, JCC staff and volunteers moved everything possible from the ground floor to the first floor. Terri Travers, JCC Director of Sports, Fitness, and Recreation both then and now, said staff members and volunteers used well-coordinated teamwork.

“When we realized how bad it was going to be, we had one day to move things,” she said. “We moved as much as we could from the Early Learning Center and the fitness center to the Mary Sachs Auditorium. Everyone stepped up pretty quick to help.”
Alan Roumm said that people involved with the fitness center had learned from previous storms the importance of getting equipment out of the lower level before flooding occurred.

“A group of us carried as much equipment upstairs as possible,” he said. “We moved all the exercise bikes, a lot of the weight equipment, and even some of the bigger machines that could fit in the elevator. People from the Early Learning Center were doing the same thing.”

After everything not bolted to the ground floor was moved, the JCC was evacuated. Staff and volunteers returned to the center on September 10, 2011 and found massive devastation on the ground floor. JCC/Federation leaders called the damage “overwhelming.”

Although the Susquehanna River did not cross the street to the JCC, mud, mold, and toxic substances snuck into the JCC ground floor drains.

Jay W. Steinberg, then the Chief Executive Officer of the Jewish Federation of Greater Harrisburg, at the time said restoring the basement carried a $1.5 million price tag. He contacted the flood insurance company and began looking into Federal Emergency Management Agency flood grants.

After determining that the building was safe from structural, electrical, and other hazards, staff and volunteers rolled up their sleeves and got to work. Travers said that although the main entrance and first floor were undamaged, the ground floor wasn’t so lucky.

“The back door buckled from water pressure,” Travers said. “It looked like a river was running through the Early Learning Center. The pool area and Fitness Center were under water. I saw fish swimming in the pool.”

The JCC hired a remediation company and began the huge cleanup. Water was pumped out, the water-logged floors were torn out, walls were taken down to the concrete blocks, and whatever could be still used was salvaged.

Various operations of the JCC were relocated and life went on:

Remediation took several weeks. Outside among the colorful playground equipment, a crane sat ready to install heating and air-conditioning equipment.

Travers said that staff and helpers had to move the Early Learning belongings from the Mary Sachs to temporary pods outside, then to Ohev Sholom.

“It was a crazy time,” she said. “It felt like we were a moving company. We were laborers and had bumps and bruises - I never felt so tired and bruised. It was rough for a few months.”

Cheryl Yablon, then and now Senior Adult Director, said the senior program lost some decorations in the flood. But she said the senior luncheons went smoothly at Kesher Israel for the couple months they were held there.

“During this time, a lot of people helped the JCC move equipment and Early Learning items,” she said. “Everyone helped as much as they could, even if they had damage to their own homes.”

Roumm went to the JCC the week after the flood and saw “water and mud everywhere on the lower level. You could only go down a few steps to the lower level because of the water.”

Although the ceiling tiles were above the water level, most ground floor tiles and some first floor ones were saturated and warped because of the heavy humidity, he said. They had to be replaced.

Shortly after the flood, Roumm started going to the YMCA to swim at least twice a week, an arrangement the JCC makes with the YMCA after floods. His friends – avid spinners Jon and Linda Cohen – got temporary memberships in the then-new Gold’s Gym on Linglestown Road. There, they found treadmills, some exercise equipment, and spinning bikes, but no classes.

Eventually, exercise and spinning classes were held in the Mary Sachs Auditorium and the Cohens and Roumm returned. They’re still there, across the hall in the dedicated spin studio.

“I remember spinning in the Mary Sachs Auditorium,” Linda Cohen said. “They had giant fans there. There were morning and evening classes.”  After a while, spinning classes moved downstairs to the fitness center. About five years ago, spinning relocated to its current first floor location.

“Our spinning class numbers now are not as high as they used to be,” he said, “but they’re picking up. Spinning has a faithful following. People find a class and instructor they like and keep going to that class.”

Roumm said that the pool opened before the locker rooms were back to normal. The storm had damaged the locker room floor but one member managed to get some orange and black carpet tiles that made a walkable path from locker room to pool, Roumm said.

Despite the damage, Travers said, she never doubted that the JCC would rebuild. “We drew opportunities from the experience. We adapted and offered what services we could to stay part of our members’ lives. A lot of our members really stuck with us.”

Travers remembers how people looked ahead to getting the Center back to normal.

The combination of hard work, dedication, and love of the JCC brought it back stronger than ever.

“Our members love the JCC,” Travers said. “It plays such a part in people’s lives that they want to see it succeed. We were all working toward something together. We knew it would get better and it did.”