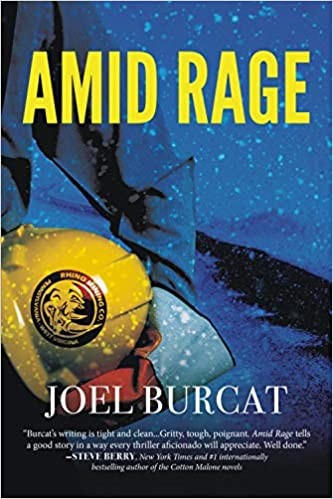 Joel Burcat’s writing career did not happen overnight. Like many books in the thriller genre, his career could be described as a slow burn.

“I started writing when I was in high school,” says the retired environmental lawyer. “In my mind, I always wanted to write, but I was too busy practicing law.”

When he turned forty years old, he had a short story published in Harrisburg Magazine. He started writing seriously, he says, around fifty. His first book, Drink to Every Beast, was published in 2019, shortly after his retirement at age sixty-four. Now, he is releasing Amid Rage, an environmental legal thriller following the saga of Mike Jacobs, a Jewish Harrisburger who was introduced in Drink to Every Beast.

With exploration of psychotic coal mine operators and kidnappings, Joel aimed to convey intrigue within a subject that he admits can be tedious and bureaucratic.

“There aren’t that many environmental legal thrillers,” he says. “The challenge I have is to write a book about something that has potential to be boring in a way that is exciting.”

Joel says he writes “every day.” While this is his second novel to be published, he has finished several others and sometimes starts a new project before the previous one is finished, often coming back to past stories to chip away at them more.

“Characters start whispering to you,” he says. “I’ve gone back and read stuff from before and really like it and think ‘I ought to do something with this.”

He says that he had started on a new idea the day prior to our interview and had already gotten the ball rolling by pumping out five thousand words. “I think I’ll continue it tomorrow,” he says.

Still, Joel says that this is the perfect time for a book focusing on the subject matter in Amid Rage – and he feels it is his best yet. “This book deals with coal mining and climate change and I feel it’s an important environmental issue.”

He believes that readers of Drink to Every Beast will find the protagonist still has plenty to offer. “Mike Jacobs is two years older now,” he says of the character’s role in the newest story. “He’s in over his head a lot, but he’s got a lot of character, he’s a smart guy with the desire to do the right thing, and sometimes his enthusiasm gets away from him and he goes a little bit too far.”

The book will be published on February 2nd, and will coincide with a virtual release party featuring Joel and moderated by community member Harvey Freedenberg through the Midtown Scholar Bookstore. The program can be joined via Zoom at 7pm the same day.

“Joel Burcat’s literary career is a tribute to his willingness to persevere against obstacles that confront every writer, and some that are unique to him,” says Harvey, a book critic and fellow retired lawyer. “His growing body of fans attests to his talents for creating intelligent, absorbing legal thrillers.”

Amid Rage can be purchased beginning February 2nd through local bookstores such as Midtown Scholar and Cupboard Maker Books, as well as online.