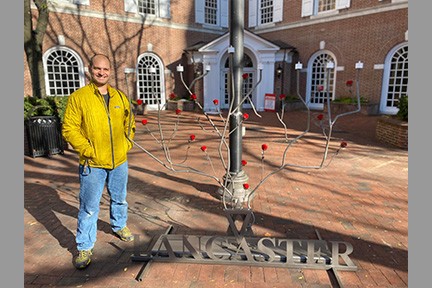 When Mark Lewin puts his mind to something, he usually gets it done.

That resolve was inspiration for an unusual, longtime goal that the metalworker and airline pilot had visualized.

“I always wanted to create a large menorah in steel,” he says. “Steel symbolizes the strength of our religion, and I also knew that it would be a challenge.”

So when he got a call from leaders of the Lancaster Jewish community asking if he could help build a fixture for a public menorah lighting, he jumped at the opportunity.

It’s the first time (at least in recent memory) that a menorah will shine alongside the Christmas tree in Lancaster’s Penn Square, spurred by a call from the city’s Department of Neighborhood Engagement to Rabbi Jack Paskoff of Congregation Shaarai Shomayim.

“The fact that this initiative came from the city speaks volumes about how they want to honor not just its residents, but the people who worship here,” Rabbi Paskoff says.

Rabbi Paskoff got in touch with Miriam Baumgartner, Board President of the Jewish Community Alliance of Lancaster (JCAL), who along with Oren Yagil, Director of the Klehr Center for Jewish Life at Franklin & Marshall College, enlisted Mark to construct a massive menorah.

Following the attack on the Tree of Life building in Pittsburgh, Mark had been moved to create a large, wooden menorah to be displayed at his synagogue, Temple Beth Israel, in York, PA. The committee had heard about this project and felt that Mark would be up to the task in creating a piece for Lancaster.

By all accounts, he succeeded.  “It’s simply beautiful,” Miriam says of the design.

Standing 6’ x 6’, the menorah is crafted 100% from steel and is designed as a rose bush. In addition to its branches to hold the candles, it features eighteen red roses in a nod to the “Red Rose” city of Lancaster. The entire sculpture, which took four months to complete and is estimated at 250 – 300 pounds, balances on a 10” wide Star of David.

“I had a lot of fun with it, kind of creating what I called ‘imperfect perfect nature,’” Mark says. “I see the miracle of Chanukah as having similarities with the miracle of nature.”

Each night of Chanukah, one of five Lancaster Jewish organizations has lead the community in lighting the menorah (some will lead multiple nights) – those organizations are Congregation Shaarai Shomayim, Temple Beth El Lancaster, the Klehr Center for Jewish Life, Chabad of Lancaster, and JCAL.

The public display comes at a time when antisemitism is on the rise across the nation. In late October, it was revealed that a white nationalist group held a clandestine conference in Lancaster County, with speeches filled with anti-Semitic vitriol.

“We have many neighbors – some are wonderful, yet there are also those who hate us,” Miriam says. “This gives us an opportunity to educate our neighbors.”

Mark says that he hopes that the piece, which has the word “Lancaster” inscribed across the base, will be something that Lancaster-area Jews can cherish for years to come.

“Every community has something with which they identify,” he says. “I hope that the Lancaster community can look at this menorah and feel that it brings them together, not just in the story of Chanukah, but the story of their community.”